“Dinner with an Artist” was inspired by the many dinners ANNE REED GALLERY’s owner, Barbi Reed, has had the pleasure of enjoying with gallery artists over the years. It was during these dinners that the conversation twisted and turned to the delight of all sitting around the table. 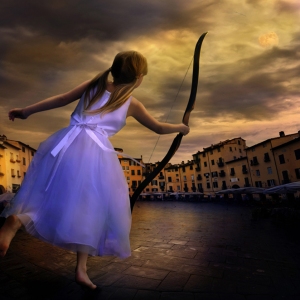 There was no more perfect way to relax and enjoy the camaraderie of artist, collectors, and staff after the intensity of curating, preparing for, and installing an exhibition. Today, we invite you to this virtual dinner table conversation with Tom Chambers to discuss his current exhibition: Illumination.

ARG: When did you first begin taking photographs and when did you start working with digital equipment? What was your work like prior to digital cameras and computers?

TC: I was hit with the travel bug early on. In the 1970’s I hitchhiked across the country and through the Canadian Rockies where I took photos of landscapes and wildlife with a 35mm Yashica camera. Later I attended Ringling School of Art where I majored in graphic design and minored in photography. In the early 1990’s I began using Photoshop software as a graphic designer, which gave me the opportunity to see the possibilities for artistic expression.  Since then I have been having fun making photomontages. 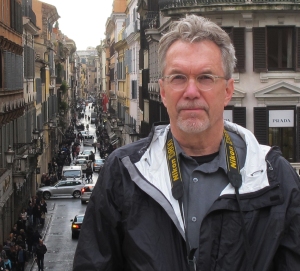 ARG: Are there artists or other photographers who have influenced your work?

TC: When I first began creating photomontages using Photoshop, Mexican photographers who used magic realism had a huge impact on my images. Manuel Bravo, whose images convey a sense of the unexpected and irony, has been a source of inspiration as were the stark black and white images by his student, Graciela Iturbide, who explores the relationship between man and nature. I was drawn to Mexico which led me to create a series inspired by the Mexican ex votos, paintings of miracles made possible by the saints.

ARG: Did your upbringing on a farm in Amish country, Pennsylvania affect your work in any way? We’d enjoy hearing a little about how your early experiences might have influenced your work or directed your vision.

TC: Growing up on a farm in Lancaster, PA forged my connection with the out-of-doors. My family shared with me a respect for nature through daily living on a working farm with crops and livestock.  As kids, we used our imagination playing games in the fields and woods, rather than structured games and activities.

I was deeply influenced by my grandparents. They also lived on the family farm, yet their livelihood was painting and illustration. When my grandmother was able to corral me, she taught me to draw and paint, and gave me great encouragement to experiment in art. My grandfather, influenced by his acquaintance with NC Wyeth, introduced me to the art created by the different members of the Wyeth family. In particular, I was most influenced by Andrew Wyeth, son of NC, who incorporates a sense of emotionality into his landscapes. I hope that my photomontages also evoke an emotional response.

ARG: It appears that various series originate from or are inspired by a specific geographic location. What draws you to a region initially?

TC: I am inspired artistically by travel which allows exposure to art, literature, music, food, traditions and religion. I tend to select places where I can immerse myself in many different aspects of a culture. I am not one who likes to stay within the confines of a resort. The Ex Votos and Dreaming in Reverse series were influenced by repeated travel in Mexico, whereas the Illumination series was influenced by several trips to Italy.

ARG: In your statement you say your work is intended to “invoke a mood” in the viewer. What “mood” did you intend to invoke in the Illumination Series? Can you talk a little about the narrative that runs through this series?

TC: I was struck as I traveled through Italy by the stunning beauty of light and shadow. In particular, Tuscany and Venice spoke to me. In my photomontage work I attempt to replicate the sense of wonder I felt. Each image tells a story that ultimately is left to interpretation by the viewer.

Walk on the Wild Side, Photomontage, Archival Digital Print (Click for more information).

ARG: Your images appear to be saturated with rich, warm colors. How does color influence your choice of subject to photograph and include in your photomontages?

TC: I think that those warm colors invite the viewer to connect with the image by drawing the viewer into the image. When people describe my images they typically first mention my use of color.

ARG: Many of your images have an ethereal quality and all are very narrative. Do you envision the narrative prior to taking your photographs or does this happen only after you have the background photograph?

It really happens both ways. When I have an idea for a series, I make thumbnail sketches of ideas. Then, I will shoot separately the landscape and the different elements. Typically each image is a composite of five to ten elements. In some cases, I find a background or an object that inspires an idea for a photomontage.

ARG: What camera(s) do you use? We’d also be interested in finding out more about your library of images and your process in creating each new work.

TC: I use a Nikon D800 for shooting. I love the flexibility that the camera offers me. Not too big and bulky, I can drag it with me on vacations.  Using that camera and a small variety of high-quality lenses enables me to print large, sometimes up to 50 inches. 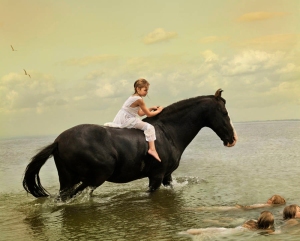 Even though I have folders of thousands of images, I really don’t keep a library of images as a source for creating photomontage. As I am developing a photomontage, I enjoy shooting what I consider the perfect shot for what I imagine will be the final product. Only occasionally, will I return to a shot which I have taken previously that might fit a current project.

ARG: We’re sure you have other places you’d like to photograph and other series in mind for the future. Is there anything you can tell us about where you might go next and your vision for the next series?

TC: Currently, I am completing some additional photomontages for each of my six series. I have some ideas percolating for a totally new series, but have not settled on a particular direction. While travel provides inspiration for my work, I don’t have any new plans for a series about a particular location.

ARG: We raise our glass to you and to your latest wonderful exhibition with ANNE REED GALLERY. Although we’ve many more questions for you, perhaps we should end this conversation by asking if there is there anything else you would like to say, either about your work or perhaps something totally unrelated.

TC: I thought that you might be interested in knowing that Modernbook Editions published a book of my work, “Entropic Kingdom”, in 2012.  The book contains highlights from my first 5 series, but this series “Illumination” was created after the book was published.

Thank you for showing my work at the Anne Reed Gallery.  I particularly appreciate your support for my work.

ARG: Thanks, Tom. We’ve so enjoyed sharing a conversation over a “virtual dinner” with you and we so look forward to more time with you in the future. It is an honor to exhibit your work. Congratulations on Illumination, a beautiful series. Cheers!